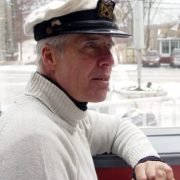 Momentum on this project really started when I located and purchased the used storage tank that would become my submarine pressure hull.

Up to this point, people literally hung up on me when I called on the phone to inquire about purchasing the parts and hiring the services required to build a personal submarine.

Maybe something in my voice changed once I got that tank. People started taking time to listen to me and talk about the sub. Getting that tank was my rubicon, my point of no return, and I haven’t looked back. I only wish I’d started sooner.

I ended up finding a company in nearby Rhode Island that sells used storage tanks originally built for storing propane, industrial gasses and such. They were uncharacteristically willing to listen. By a quirk of fate, it turns out the guy in charge at Total Energy, “the world’s largest inventory of ASME storage tanks,” is a trustee for the Hunley project. He gave me a metal model of Hunley with the tank delivery.

If you do not know the name, H.L. Hunley is a Civil War submarine built by the Confederate States of America. It is the first submarine in the world to attack and sink a ship. Hunley was built from a steam boiler tank, a 19th Century version of my 21st Century technique. Another interesting circumstance is that Hunley sank the USS Housatonic, namesake of the river on which my SeaHawk will eventually berth.

Should you be interested in yet another historic connection, Simon Lake, father of the modern submarine, lived in Milford, CT; his Lake Torpedo Boat Company built WWI submarines for the U.S. Navy in Bridgeport, CT; Lake also founded and was president of Housatonic Shipbuilding Company.

I am building SMV SeaHawk in Bridgeport, CT and live in Milford along the Housatonic River. 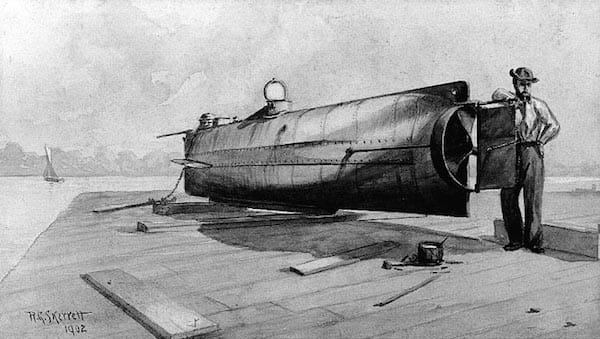